On my ninth I fell from a tree and broke my wrist. I was tough and did not budge. My left wrist was twisted and I asked a friend to put it right again. And so he did. Later in hospital, this turned out not to bee such a wise action... my fault... not to blame my friend. Eventually it appeared a miracle that the doctors were able to save my hand. And so they did. The doctors where proud and I kept my hand.

As a small kid I already had fallen in love with the sound of the classical guitar, that I heard on the radio. It must have been Andrés Segovia, for there where no other guitar players, that could be heard on the radio at that time... talking about the 40ties of the last century. Later I bought a single from Segovia, from my pocket money, and my dissension was made... this was what I wanted to do with my life... play the classical guitar.

My working life started early, in the construction, in the factory ánd in the swimming pool where I proved to have a natural talent for teaching. I always teach, even when it is not asked for.
My desire for adventure however made me go to Canada, where I started as a dishwasher, worked a few years in the construction, in a bakery, as a milkman and in the forestry. Later I returned to the Netherlands to study classical guitar... my first and final dissension.

On the conservatory I was confronted with my broken wrist again. Final dissension or not... life is hard. So, being so tough when I fell from that tree, finally determined my guitar career. I cannot bend my wrist properly, so every movement I make on the strings with my left hand is tricky, for I never could be sure if I would grab the right position... my own body could not be trusted. These are the moments that make your life. And after all I had this natural talent for teaching... This physical problem of me, made me a more attentive teacher.

At that time, in the late sixties and early seventies the guitar was not a major course in the conservatory. We had to study piano also. (Guess what this does with your finger nails.) We students where to be the new guitar teachers for the next generation. The guitar profession was just getting to become mature. What guitarists do now... we only could dream of!

Meanwhile my desire to compose new music arose. I really felt it as a a need. I wanted to hear new sounds and music that could be played more easily. Originally written for the guitar and not for the piano for example. New music that I could play with my friends. New modern music... new cords, broken chords, diminished and augmented chords. New space and freedom to break all the rules... and still make melodious music... this is what I like... this makes me compose. And I go for the content, for the musicality, not for the showing off, because you need not to be a technically excellent guitar player to play good music. My music is the result of a lifetime :)

When I play my music myself I do not like it so much as when somebody else plays it. To hear, it is good... a spark that comes across... So, when ever you like to record my music... send it to me! I am very curious about your interpretation! Let it be a good surprise! You want a clear print on paper? Tell me trough the contact form :) 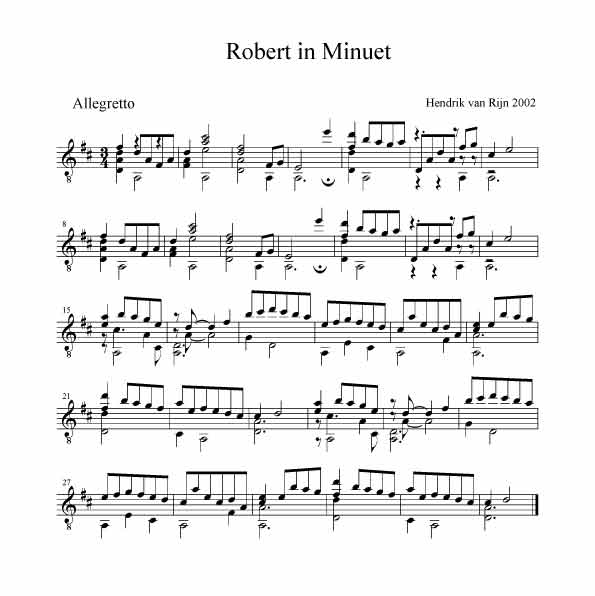 Homepage
Abonneren op: Posts (Atom)
For a clear print on paper you can always contact me trough the contact form below.
I am very curious how you like to interpret my music... so send me your soundtrack... if you dare. Well... 'Don't worry'.

Long time ago, a Haiku poet... (sorry I forgot his name) inspired me to compose one poem a day. So I made about 140 HAI-COOL's and found out that I am in another mood every day! Maybe it is kind of cool for you to play a poem every day... and find out in what mood it gets to you ?

A Small Concert in 3 Parts, for 3 guitars

... And They All Went Into Exile Freely

A Consort: Gamba or Fiddle quartet and one guitar 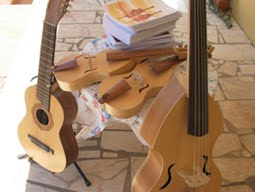 3 Fidles and a Guitar built by Stella Andrea

Grassy Pastures
Those Feather-light Cords
At Ease
Acquaintance in an Alley
Contents of Time in memory of J.S.Bach
High Skies
Dennio
End And Arrival
Talk to Me
UP!
Robert in Minuet + Hendrik about Hendrik
Father Sebastian
A Drawing played by Hendrik + cartoon video
The Long Road
Tell me Waterfall
No Morning Like This

'Plants': A sequence of Drawings by Stella Andrea, with me playing my composition 'Cinema'.

John Dowland 'the source of song'

by Sting and Edin Karamazov

So, why not compose melodic music that is comfortable to play on a classical guitar, in stead of making it more difficult to play than it sounds? This became my goal. I want musicality to prevail above technique. Because not the technique makes the music, the musicality does.

You will not find many compelling directions in my compositions. The pitch is fixed and I give you a hint, but you are as free as a bird, in interpreting, in embellishments and in tempo.
I compose for pleasure, for myself and my fellow players. This allows me to feel free to share my music with anyone who likes it. I am very curious how you (like to) interpret my music... so send me your soundtrack... if you dare (like)... to enjoy :)
This blog is the result of a lifetime.
I hope you enjoy the music like I do.
For a clear print on paper you can always contact me trough the contact form below.

and a homage to Robert de Visée - 'in Minuet'